Sunday: Scores Of Palestinians Injured, Two Abducted, In Attacks By Soldiers And Colonizers 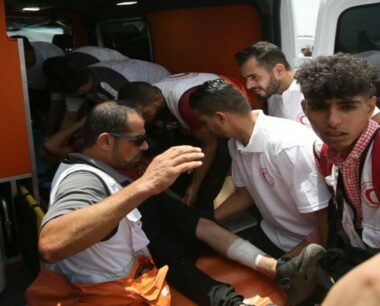 In Nablus, in northern West Bank, the army attacked nonviolent protesters in Sbeih Mountain, in Beita town, south of the city, wounding many Palestinians.

Ahmad Jibril, the head of the Nablus office of the Palestinian Red Crescent Society (PRCS) said the soldiers shot a young man with a rubber-coated steel bullet in the arm, in addition to shooting four others with gas bombs directly to the head, and caused 47 to suffer the effects of tear gas inhalation.

Also in Nablus, Israeli colonizers assaulted a Palestinian farmer while he was working on his land in Beit Dajan, southeast of the city.

The PRCS said the Palestinian, Haitham Yasser an-Na’aji, 25, was moved to Rafidia governmental hospital in Nablus, after suffering various cuts and bruises.

In occupied Jerusalem, dozens of colonizers, accompanied by soldiers and police officers, stormed the courtyards of the Al-Aqsa Mosque, and conducted provocative tours, after the army assaulted the Palestinian Muslim worshipers and forced them away.

In Hebron, in southern West Bank, the soldiers abducted a member of the Regional Council of Fateh movement, identified as Mohammad Khaled Shawaheen, from his home in Yatta town, south of the city.