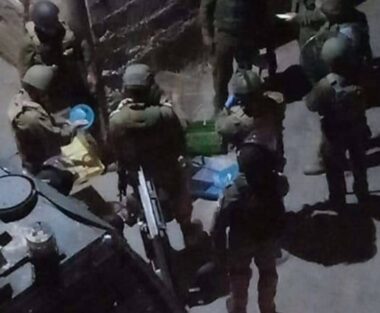 Israeli soldiers abducted, on Monday at dawn, twelve Palestinians from their homes in several parts of the occupied West Bank, including the occupied capital, Jerusalem.

The soldiers invaded the al-Am’ari refugee camp, near the central West Bank city of Ramallah, and abducted two Palestinians from their homes.

During the invasion into the al-Am’ari refugee camp, which led to protests, Israeli soldiers fired rubber-coated steel bullets, gas bombs, and concussion grenades at those who resisted.

Furthermore, the soldiers invaded Beita town, south of the northern West Bank city of Nablus, and abducted six Palestinians, after invading their homes and ransacking them.

In occupied Jerusalem, the soldiers abducted three Palestinians from Bab al-Amoud (Damascus Gate) area, and took them to a nearby detention center, in addition to one, identified as Mohammad al-Qawasmi, who was taken prisoner from his home in Anata town, northeast of Jerusalem.

In related news, the soldiers invaded Ya’bad town, southwest of the northern West Bank city of Jenin, before demolishing commercial structures and a water tank.

In the Gaza Strip, the army invaded Palestinian farmlands east of the al-Maghazi refugee camp, in central Gaza, and bulldozed them.