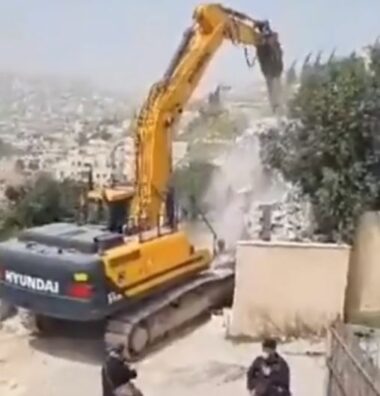 The soldiers invaded the as-Sal’a neighborhood in Jabal al-Mokabber town, east of Jerusalem, before demolishing a two-story home, owned by Khaled and his brother Monir al-Abbassi.

The Abbasi brothers built their building in the year 2016, and attempted to obtain the required construction permits; however, their applications were denied.

The two siblings managed to obtain court rulings freezing the demolition, but the army went ahead and destroyed their property.

The City Council in occupied Jerusalem also said it will impose more fines and fees, in addition to forcing them to pay the demolition costs of their property.

One of the demolished homes in Ras Khamis consisted of two rooms with a tin ceiling, as the family could not afford more costs.

It is worth mentioning that Israel has demolished 197 Palestinian homes during the year 2020, among them 77 homes that the owners had to self-demolish their properties to avoid the excessively high fines and fees, in addition to the demolition costs if the city uses its workers and equipment.

According to data compiled by the Israeli Committee Against House Demolitions (ICAHD), Israel demolished a total of 865 structures, (including homes, rooms, and other facilities), displacing 1014 Palestinians across the West Bank, including Jerusalem.

The illegal Israeli policy of home demolitions and collective punishment has led to the destruction of more than 120.000 Palestinian homes since Israel was established in the historic land of Palestine in the year 1948.