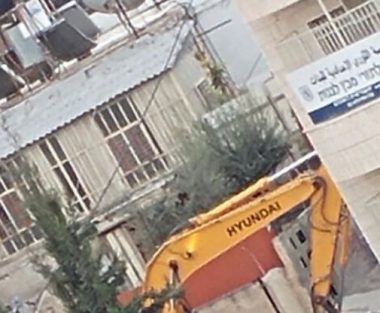 Israeli soldiers demolished, Wednesday, a storage room, a parking structure and walls surrounding it, in the al-Abbasiyya neighborhood, and a warehouse for construction materials, in Wad Qaddoum, in Silwan town, in occupied East Jerusalem.

The Wadi Hilweh Information Center in Silwan (Silwanic) has reported that a large military force, accompanied by bulldozers, invaded al-Abbasiyya after surrounding it, and demolished a parking structure, a warehouse and walls extending 30 meters.

The demolished properties’ owner Malek al-Abbassi said the family was surprised by the invasion and demolitions of the property that was built even before Israel occupied East Jerusalem in 1967.

“The demolition was made without a prior notice; several days ago, our lawyer said the court has ruled for an extension of its demolition order,” Malek said, “But the City Council initiated the demolition anyway before all legal work was concluded.”

He also said that, a few days ago, the soldiers invaded the property and its surrounding area, and photographed the parking structure, the warehouse and the walls.

Furthermore, the soldiers invaded Wad Qaddoum neighborhood, in Silwan, and demolished a warehouse used for selling construction materials, reportedly for being built without a permit.