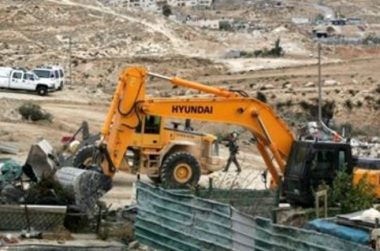 Israeli soldiers demolished, Wednesday, several sheds and barns in Qrontol Mountain area, in Jericho district, in the occupied West Bank, under the allegation of being built without permits.

The demolitions were carried out after several Israeli army vehicles, and bulldozers invaded the Qrontol mountain area, after surrounding it.

Sabah Abu Rashed, an official at the Jericho Governate office, said the soldiers repeatedly target the Palestinian shepherds, farmers and Bedouins, in an attempt to force them out of their lands, to replace them with illegal colonies and military bases.

On Tuesday, the soldiers demolished several sheds, tents and barns, owned by Palestinians living in the al-Jiftlik town, north of Jericho.