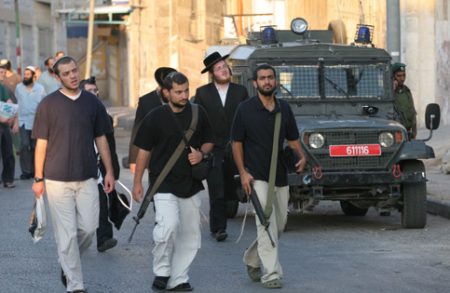 The racism in Israel is reflected in every aspect of life, the most recent of which comes within the context of disclosing that the head of the Regional Unit for enforcing laws of planning and building at the Israeli Ministry of Finance, Adv. Avi Cohen, is living in an unlicensed building located in the illegal Bilgi Mime outpost, built in 1984, on lands belonging to Qaryout, Saweiya and Al-Luban in the Nablus Governorate, under a government resolution.

Cohen was appointed 2 years ago to his position at the unit, also known as the Regional Unit for Monitoring the Building.  Moreover, the unit has the power and authority to follow up on everything related to construction, in cooperation with all planning institutions.

The settlement outpost where Avi Cohen resides includes approximately 40-fixed and mobile buildings.  It should be  noted that the Eli settlement, itself, is without a structural scheme, whereas part of it is located on private Palestinian land.  Within his position, Cohen was in charge of issuing demolition orders for buildings built without permits in Israel, and was in charge of the administrative proceedings which ended with the demolition of 11 houses in Qalansawa town. Between 2001 – 2007, orders were issued to demolish all the buildings in Bilgi Maime — which was built on private Palestinian land — but nothing was done.  Thus, the occupying state provided a structural map for construction in the Eli settlement, with the exclusion of the Bilgi Maime outpost where Cohen resides, but, at the same time, provided a faux mechanism to allow building in Bilgi Mime, naming it so that local authorities might work there under an approved structural plan, and issue building licenses thereto.

At the same time, the Israeli occupation government continues to defy the international community and refuses to comply with UN resolution 2334, which criminalizes the settlement and demands that the Israeli government halt its settlement activities. Regardless, the occupation government continues to, in fact, expand settlement and land seizure activities, following the Knesset’s approval of a draft law now in its 2nd and 3rd readings, for recognizing the military court’s resolutions in the occupied West Bank as acceptable evidences in the civil proceedings at Israeli courts, and despite the the Israeli Attorney General’s prior warnings and international consequences, should the law be passed. Likud party MK, Anat Berko, who submitted the draft, is moving with the aim of enabling the families of settlers killed in Palestinian attacks to get material compensation through civil suits.  Noting this, the law would actually constitute a form of annexation of the West Bank, within the process of legitimizing the military courts’ resolutions.

Israeli parties and forces compete to enact additional laws of apartheid and annexation, the last of which was recently announced by the head of Land of Israel Lobby in the Knesset, Yo’ab Kish from Likud, and Bezalel Smutric from Jewish Home, with a draft law which stipulates imposition of Israeli sovereignty on the settlement of Maale Adumim — built on a land belonging to Al-Ezareiya town — for voting next Sunday, as the new US executive administration settles into office with a fundamental change towards handling the Israeli–Palestinian conflict and Israeli control of the territories.  According to their estimation, it is clear that the draft law to annex the Maale Adumim settlement seeks to apply the Israeli law on the settlement, and, consequently, on the area called E1, which was annexed to the settlement.

Kish said that, in the case which a dispute occurred among the coalition members, the body would agree to bargain in keeping the E1 area outside the territories to be annexed, noting that the involved is about ​​12 sq km2, which was included under the municipality of Ma’aleh Adumim order, and surround from the north and the west.  It should also be noted that construction in this area would separate the northern part of the West Bank from the southern one.  It is also worth mentioning that the settlement act was put forward almost 2 months ago, by the so-called Ma’aleh Adumim municipality, Regfem Association and the Council of West Bank settlements, through a wide campaign led by the above mentioned parties.

Within the same context, an opinion poll conducted earlier this month, by the Israel Sameet Center, showed that 67% of Israeli Jews are in favor of imposing sovereignty over the main settlements in the West Bank, and 73% support imposition of full Israeli sovereignty over the settlement of Gush Etzion, south Bethlehem city. What is striking, here, is that nearly 25% of Jews who vote in favor of the Zionist Camp and Meretz party do, in fact, support imposing Israeli sovereignty on the Gush Etzion.

Within the same context, head of the Jewish Home Party, radical Israeli Minister of Education Naftali Bennett, said during a session held by his parliamentary party, that a Palestinian state would sink Israel with refugees, adding: “We live [in] days with long run political dimensions, and we must be vigilant, logical and monitoring the opportunities that may not be repeated as we stand at the crossroad, which gives us a choice between Palestine or our sovereignty.  Thus, the Palestinian state will not established or see the light in Judea and Samaria.  A position will be adopted, by the Israeli government, which would clearly say, no for Palestine, and yes for Israeli sovereignty.

“We would not support the creation of a Palestinian state, nor will we extend our hand for that, and we will go ahead through the current Knesset to impose Israeli sovereignty over Maale Adumim, and other settlements.”

During an investigation over a corruption case for the Yisrael Baeitenu Party , Israeli police discovered that Agriculture Minister Uri Ariel transferred funds to omit debts of a settlement company that works in the West Bank, known as the Samaria Development Co.  Thus, it is clear that a fund of NIS 2.4 million was transferred to a private company, from taxpayers to the executive arm of Aamnah Movement, which is active in the field of settlement construction.

It is clear by the remarks of Meir Turgeman, deputy mayor of the occupation municipality in Jerusalem and head of the local planning and construction committee, that he intends to impose collective punishment against Jerusalemites, and that this was actually translated on the ground of Jabal Al-Mukabir neighborhood, in occupied Jerusalem, as it did in fact take the form of such a collective campaign of punishment by the Israeli police, municipality, security and ministries, including the withdrawal of IDs and the demolition of homes.

The Israeli campaign included a resolution by the occupation Minister of Interior, who ordered to withdraw 12 IDs from members of the Kanbar family, and the distribution of demolition notices against 81 houses in  the Al-Kabnbar, Al-Jdeirh and Salaah neighborhoods — belonging to families of Al-Kabnbar, Al-Jdeirh and Salaah — under the usual pretext of building without licenses, with note that 5 of the buildings were built since the 1980s. Moreover, the move supports closure of the main roads (disturbing the movement of transportation, as well as that of people going to and from their places work and students to schools, hindering the ability of medics to provide first aid) and invading several agricultural and commercial stores, while owners were asked to vacate the areas, and, finally, threatened with demolition orders.

The National Bureau points to the continued Israeli negligence of international law and legitimacy, and the Netanyahu government’s daily flagrant violations against international law and legitimacy resolutions, in calling upon the UN and its organizations to hold to their responsibility for carrying out the resolutions related to the Palestinian Cause.