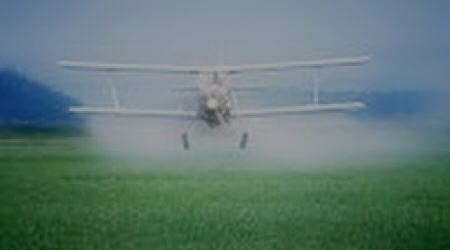 A low-flying Israeli agricultural plane, this past Monday morning, sprayed herbicides on Palestinian farmlands east of Khan Younis, in the southern part of the Gaza Strip.

Witnesses said that  the crat sprayed herbicides along the Israeli border fence and, then, sprayed farmlands belonging to citizens in the towns of Khuza’a, Abasan and Qarara.

The plane approached from the Kissufim military zone, in the north, and traversed to the borders of the eastern town of Khuza’a, in the south.

“Herbicides are sprayed in high concentrations. Thus, they remain embedded in the soil, and then find their way to the water basin. This constitutes a real hazard for the population,” farmers said, according to Al Ray.

Farmers confirm that the damages of the latest spraying extend beyond the so-called “buffer zone”, as the winds carried the chemicals further inside the Strip. They also fear consequences that such materials may affect their lands in the long run.