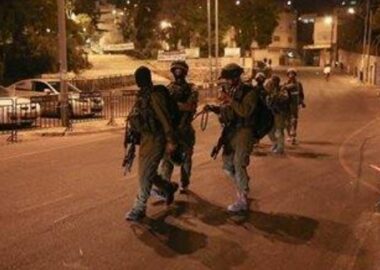 Israeli soldiers shot, on Friday at dawn and morning hours, at least ten Palestinians with live fire and caused dozens to suffer the effects of teargas inhalation, near the al-Jalama military roadblock, northeast of the northern West Bank city of Jenin, during protests against the ongoing Israeli offensive on Gaza.

The Palestinian Red Crescent Society (PRCS) has reported that the soldiers shot ten young men with live ammunition in their lower extremities, in addition to firing at least ten rounds at a Palestinian ambulance, nearly killing its driver, and causing serious damage.

It added that the injured Palestinians received the needed first aid before being rushed to the Jenin governmental hospital and Ibn Sina medical center.

The Palestinians were marching and chanting against the ongoing Israeli escalation in Gaza, in addition to several parts of the occupied West Bank, in addition to the serious escalation of violence by the illegal colonialist settlers.