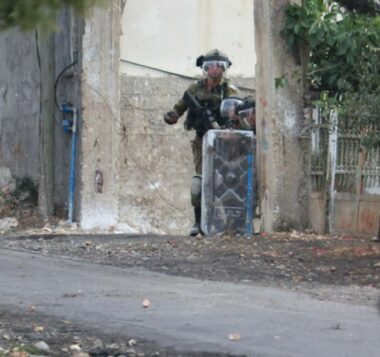 Israeli soldiers injured, Friday, a Palestinian child and an international solidarity activist during the weekly procession in Kufur Qaddoum, east of Qalqilia, in the northern part of the occupied West Bank.

The Palestinian and peace activist marched from the center of the town, chanting against the ongoing illegal Israeli occupation, its colonies, and escalating violations.

The soldiers attacked the procession with rubber-coated steel bullets, gas bombs, and concussion grenades and chased many.

Medical sources said the soldiers shot a child, Mahmoud Riyad, 14, and an international peace activist with rubber-coated steel bullets to their chests.

Also, the soldiers shot one Palestinian with live fire, and two with rubber-coated steel bullets and caused many to suffer the effects of tear gas inhalation near the Beit Furik military roadblock, east of Nablus, in the northern part of the occupied West Bank.

On Friday afternoon, Israeli soldiers attacked Palestinian protesters near the Huwwara military roadblock south of Nablus, causing many to suffer the effects of tear gas inhalation.