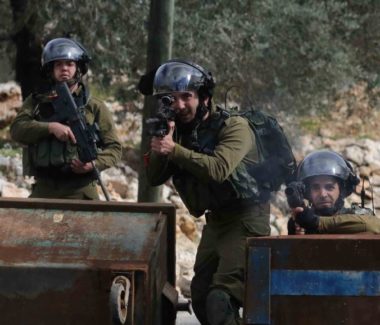 Morad Eshteiwi, the media coordinator of the Popular Committee against the Wall and Colonies in Kufur Qaddoum, said the protesters marched from the center of the village, while chanting against the ongoing illegal Israeli occupation, its colonies, and escalating violations.

He added that the soldiers fired a barrage of gas bombs, concussion grenades and rubber-coated steel bullets at the protesters and surrounding homes, causing dozens to suffer the effects of teargas inhalation.

The protesters carried signs and chanted slogans against the apartheid plan, dubbed by American President D. Trump as the “Deal of the Century,” while ignoring all internationally guaranteed Palestinian rights of liberation, sovereignty, and independence.