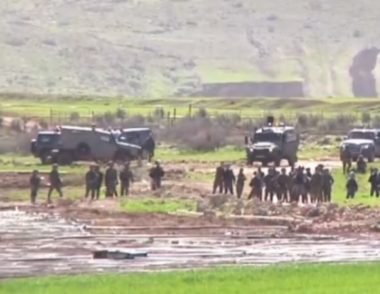 Israeli soldiers abducted, Friday, two Palestinians, in addition to injuring one with a gas bomb in the shoulder, and caused many others to suffer the effects of teargas inhalation, near Tubas, in northeastern West Bank, during a nonviolent procession against the ongoing illegal Israeli colonialist activities.

Media sources said dozens of residents, and activists, marched in ‘Atouf village, east of Tubas, before the soldiers attacked them with a barrage of gas bombs, concussion grenades and rubber-coated steel bullets.

They added that one Palestinian was shot with a gas bomb in the shoulder, before medics rushed him to a hospital in Tubas.

Several Palestinians suffered the effects of teargas inhalation and received the needed treatment by the medics.

The protesters said they will continue to protest this illegal colonialist occupation of Palestine and will not allow the U.S. Administration of D. Trump, to dictate the Palestinian fate and future, and will continue the struggle until liberation, independence and sovereignty.