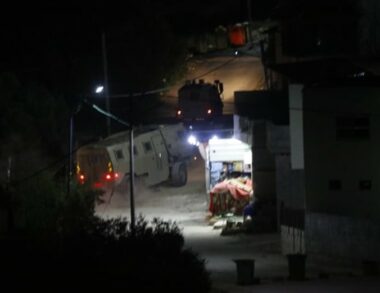 On Monday night, Israeli soldiers invaded the Silat al-Harithiya town, west of the northern West Bank city of Jenin, stormed and ransacked many homes, leading to protests, before the army injured at least nine Palestinians and caused dozens to suffer the effects of tear gas inhalation.

Media sources said the more than 150 military vehicles, including armored bulldozers, invaded the town before the soldiers stormed and ransacked many homes, including the homes of three detainees, Mohammad Yousef Jaradat, in addition to Gheith and his brother Omar Ahmad Jaradat.

They added that dozens of soldiers were deployed in every neighborhood in the town after they surrounded and isolated it.

The soldiers then stormed the homes of the three political prisoners and took measurements of the properties in preparation for demolishing or detonating them, leading to protests.

The army shot at least one Palestinian with a live round, seven with rubber-coated steel bullets.

A young man was injured after a military vehicle rammed him, in addition to many wounded by shrapnel from concussion grenades and dozens who suffered the effects of tear gas inhalation.

In related news, the soldiers abducted Nafeth Thieb Abu Obeid, 49, from the northern West Bank city of Tulkarem, after stopping him at a military roadblock near Shoufa village, southeast of the city.

On Monday at dawn, Israeli soldiers invaded and ransacked dozens of homes across the West Bank before abducting at least twenty-five Palestinians, including children and their fathers.