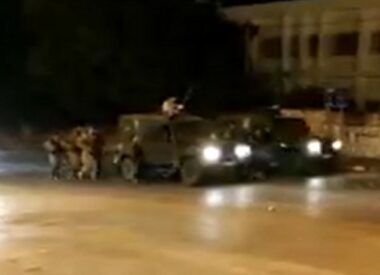 Israeli soldiers injured, on Tuesday at dawn, five Palestinians, including a journalist, in Nablus city, in northern West Bank, after the army accompanied dozens of colonialist settlers into Joseph’s Tomb, east of the city.

They added that the soldiers fired several live rounds, rubber-coated steel bullets, and gas bombs at the protesters.

Medics provided the wounded Palestinians with the needed treatment and moved the journalist to a local hospital after suffering moderate injuries.

The Israeli army frequently invades the eastern area of Nablus to accompany the colonists into the historic site, an issue that leads to protests, in addition to the ongoing invasions of homes and the abduction of many Palestinians.

Jews, Muslims, Christians, and Samaritans revere Joseph the patriarch alike, however, the Israeli military allows Jews to visit as part of organized pilgrimages, despite the site being in Area A where the PA has full control and prohibits Muslims from worshiping at the site.