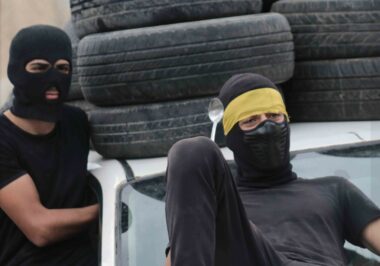 Israeli soldiers injured, Friday, four Palestinians and caused dozens to suffer the effects of tear gas inhalation, in Kufur Qaddoum and Azzoun towns, east of the northern West Bank city of Qalqilia, during the weekly processions.

Morad Eshteiwi, the media coordinator of the Popular Committee against the Annexation Wall & Colonies in Qalqilia, stated that dozens of Palestinians marched towards the town’s blockaded main road before the soldiers started firing at them.

He added that the soldiers shot three young men with rubber-coated steel bullets, and caused many others to suffer the effects of tear gas inhalation. The Palestinians were marching while carrying Palestinian flags, and calling more solidarity with the political prisoners in Israeli detention camps, in addition to chanting for liberation and independence.

Kufur Qaddoum witnesses frequent Israeli invasions, assaults, and abductions as it continues to hold its weekly nonviolent processions against the illegal Annexation Wall and colonies, and against the closure of the main road, which was blockaded by the military eighteen years ago, to enable easy access for colonialist settlers driving to and from the Kedumim colony, built on private Palestinian lands.

The Israeli army also installed many roadblocks on all roads leading to Qalqilia city and surrounding villages and towns, leading to protests.