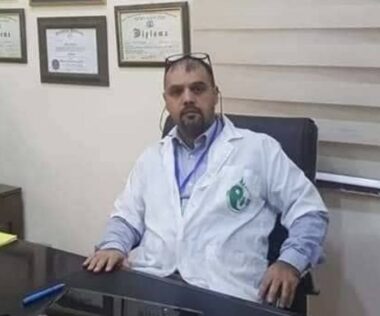 Updated: Israeli soldiers killed,  Friday, a Palestinian physician near Bab al-Asbat, one of the gates of the Al-Aqsa Mosque, in occupied Jerusalem, after the army claimed that he “attempted to stab a soldier.”

A video by a Palestinian photojournalist, identified as Ibrahim Sinjilawi, revealed that, after the soldiers shot the Palestinian physician, they handcuffed him, and then a soldier placed his foot and then his knee on the wounded man’s back, despite his upper back gunshot wounds.

The soldiers could also be seen greeting each other, and one shaking another officer’s hand.

The Palestinian Detainees’ Committee stated that the slain man has been identified as Dr. Hazem al-Jolani, 50, and added that he suffered serious wounds before he was transferred to Hadassah Israeli medical center in Jerusalem, where he succumbed to his injuries.

The Israeli soldiers shot Dr. Hazem, from Shu’fat in Jerusalem, near Bab al-Majles in the Old City, and prevented the Palestinians, including medics, from approaching him, and later an Israeli ambulance arrived at the scene and took him to Hadassah.

He was officially pronounced dead due to his serious wounds, shortly after arriving in Hadassah.

It is worth mentioning that Dr. al-Jolani was specialized in physical therapy and served as the director of The Ryan College of Complementary Medicine in Jerusalem.

Israeli sources claimed Dr. Jolani allegedly “attempted to stab a soldier, before the army opened fire at him, causing serious wounds”, and added that the man was moved to Hadassah Ein Karem Hospital, where he succumbed to his injuries.

The sources added that the injured soldier, 19, sustained a mild wound to the leg by a ricocheting bullet fired by the soldiers and was transferred to Shaare Zedek Medical Center In Jerusalem.

After the fatal shooting, the army and the police closed Bab al-Majles (The Council Gate) and the al-Waad Street leading to it, in addition to pushing dozens of soldiers, officers, undercover troops, and security agents in the entire area.

The army also closed all the gates of the Old City and installed dozens of military roadblocks.

Israel sources claimed that, while Palestinian protesters were present in the courtyards of the Al-Aqsa Mosque, not far from the scene of the alleged stabbing attack, “there were no reports of confrontations with the soldiers or the police.”