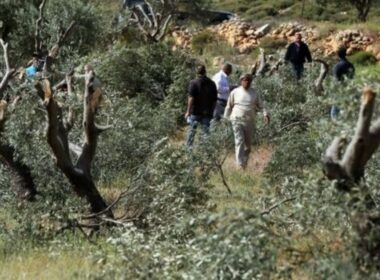 Ahmad Ghazal, the head of Kisam Village Council, stated that the Israeli assailants came from the illegal Abie Hanahal colony, which was installed on stolen Palestinian lands.

Ghazal added that the colonizers uprooted at least 50 olive saplings in an orchard, owned by a local farmer, identified as Ayyoub Yousef Obeyyat.

It is worth mentioning that Kisan and its lands are subject to frequent Israeli violations and escalation by the army and the colonialist settlers.

The violations include cutting and uprooting trees, destroying and flooding farmlands, attacking the local farmers and shepherds, and the constant attempts to illegally annex their lands.