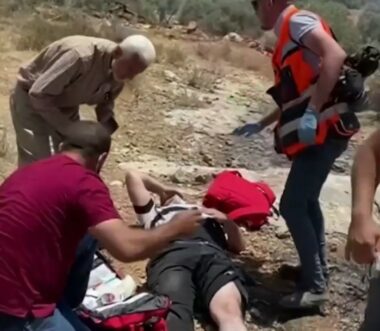 Ahmad Jibril, the head of the Emergency Department of the PRCS office in Nablus, stated that the medics provided treatment to 174 Palestinians, including many who were shot with the rubber-coated steel bullets, in addition to those who suffered fractures and bruises.

He added that the injuries took place when the soldiers attacked protesters in Beita, Osarin, and Huwwara, south of Nablus, in addition to Beit Dajan, east of the city.

He also stated that eighteen Palestinians, including one journalist, were shot with rubber-coated steel bullets, 97 suffered the effects of tear gas inhalation, and 18 suffered burns and bruises, during protests in Sbeih Mountain in Beita town.

Two other Palestinians were shot with rubber-coated steel bullets in Osarin village, and one in Beit Dajan.