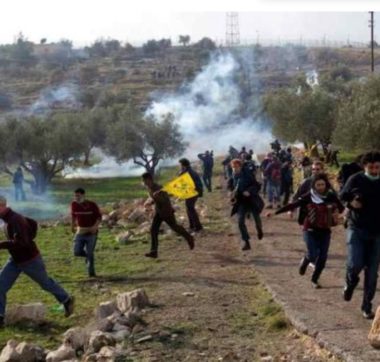 Israeli soldiers injured, Friday, many nonviolent protesters in Bil’in village, west of the central West Bank city of Ramallah, during the weekly procession against the illegal Annexation Wall and Colonies.

The Popular Committee against the Annexation Wall and Colonies in Bil’in, has reported that dozens of Palestinians, accompanied by Israeli and international peace activists, marched from the center of the Palestinians, carrying Palestinian flags and chanting for liberation, independence, national unity, resisting the occupation and the release of all political prisoners.

They also carried posters of Israeli activist Jonathan Pollak, who was arrested by the Israeli police from the offices of Israeli daily newspaper, Haaretz, where he is employed.

Pollak is facing charges for what the police claim, “attacking soldiers during protests in the West Bank villages of Nil’in, Nabi Saleh, and Bil’in,” and “refusal to appear before the court.” Both Pollak and all other activists vehemently deny the military allegation.

As the nonviolent Palestinian, Israeli and international peace activists marched from the center of the village towards the illegal Annexation Wall in Abu Lemon area, the soldiers started firing a barrage of gas bombs and concussion grenades.

Dozens of nonviolent protesters suffered the effects of teargas inhalation and received the needed treatment.

In related news, the soldiers caused many Palestinians to suffer the effects of teargas inhalation, in addition to cuts and bruises, at the northern entrance of al-Biereh city, near Ramallah.

The injuries happened when the soldiers attacked a procession with rubber-coated steel bullet, gas bombs and concussion grenades.