Israeli Soldiers Injure Many Palestinians In ‘Aboud And Budrus Near Ramallah 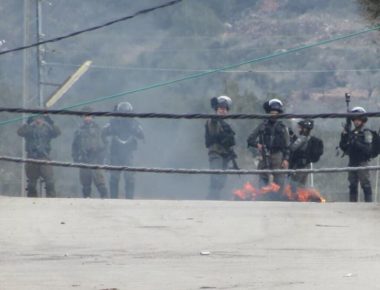 Israeli soldiers injured, Friday, many Palestinians, including a young man who was shot with a live round, after the army resorted to the excessive use of force against protesters in the villages of ‘Aboud and Budrus, near Ramallah, in central West Bank.

Dozens nonviolently marched in ‘Aboud village, west of Ramallah, protesting the ongoing closure of the village’s main road, and chanted against the ongoing illegal Israeli occupation of Palestine, its colonies and escalating violations.

It is worth mentioning that the soldiers installed an iron gate at the main entrance of ‘Aboud, more than four days ago, and have since been keeping it shut.

They added that a young man was shot with a live round in his leg, and was rushed to Ramallah Governmental Hospital, suffering moderate wounds. Many Palestinians suffered the effects of teargas inhalation.

In addition, the soldiers attacked nonviolent protesters in Budrus village, west of Ramallah, and shot four with rubber-coated steel bullets, in addition to causing dozens to suffer the effects of teargas inhalation.

It is worth mentioning that a similar procession took place in Ni’lin village, west of Ramallah, where the locals, Israel and international peace activists marched carrying Palestinian flags and chanting against the so-called “Deal of the Century.”

They also chanted against the escalating Israeli violations against the Palestinian people, their homes and lands, and their holy sites.