Soldiers Injure Many Palestinians, Abduct One, In Kufur Qaddoum 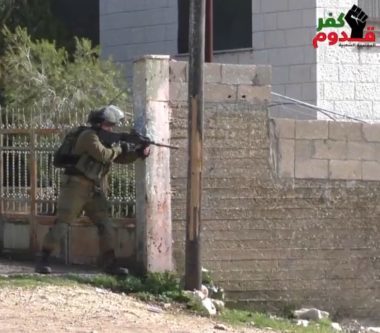 The Popular Committee against the Annexation Wall and Colonies in Kufur Qaddoum, said the army initiated the attack against the Palestinians, Israeli and international peace activists, just as the nonviolent protesters were gathering to begin their march in front of the local mosque.

It added that the soldiers shot many Palestinians and an Israeli peace activist with rubber-coated steel bullets, in addition to causing several others to suffer the effects of teargas inhalation.

Morad Eshteiwi, the media coordinator of the Popular Committee, has reported that the soldiers fired many live rounds at the protesters, and even targeted high-voltage electricity transformers.

Eshteiwi added that the soldiers abducted one Palestinian, identified as Mohammad Roshdi Amer, 31, in addition to chasing dozens of residents while firing gas bombs, live rounds, and rubber-coated steel bullets.