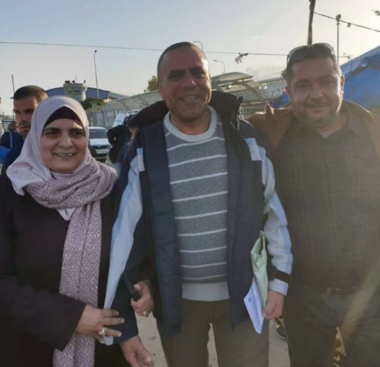 The Palestinian Prisoners’ Society has reported that Israeli soldiers released, Thursday, a Palestinian detainee, who held an extended hunger strike last year, before he was welcomed by hundreds of Palestinians in Jenin, in northern West Bank.

The PPS stated that the detainee, Tareq Qa’dan, held an extended hunger strike, lasting for 85 days, in the year 2019, protesting his continued arbitrary and illegal Administrative Detention in Israeli prisons, without charges or trial.

It added that the detainee was released from the Negev Desert detention camp and was taken by the soldiers to the military roadblock near the ath-Thaheriyya town, south of Hebron, in southern West Bank.

The Palestinian was welcomed by hundreds of residents, before he was transported to his hometown, ‘Arraba, southwest of Jenin, where a massive celebration was held to welcome him back home.

It is worth mentioning that Qa’dan was repeatedly abducted and imprisoned by Israel, spending more than 11 years in various prisons, detention centers, and interrogation facilities.