Soldiers Injure Many Palestinians, Cause Fire In Two Homes, And Abduct A Woman Near Bethlehem 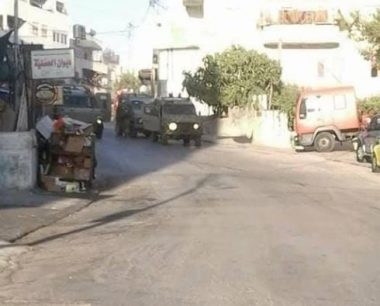 Several Israeli army jeeps invaded, earlier on Sunday morning, the town of Doha, west of the West Bank city of Bethlehem, searched many homes and injured many Palestinians before abducting one woman, and caused fires in two homes.

The invasion was carried out by a large military force before the soldiers initiated violent searches of many homes after breaking into them, especially near a mosque, in the center of the town.

Medical sources said many Palestinians were injured by live Israeli army fire following clashes that took place in the center of the town.

The soldiers also abducted several Palestinians during the home invasions and violent searches; one of them is a woman, identified as Amal Abdullah Sa’adi, 52.

Also, a fire, resulting from the Israeli concussion grenades, burnt various sections of a home, owned by Mohammad Khalil Soubani, before Palestinian firefighters rushed to extinguish it.

Furthermore, the soldiers surrounded another home, inhabited by members of Sa’ad family, and invaded it before collecting medication and their containers, and detonated them in the property, causing fires and extensive damage. Palestinian firefighters managed to contain the fire, but after it caused serious damage.

It is worth mentioning that the soldiers have abducted at least six Palestinians from their homes, in different parts of the West Bank.

The army also claimed it managed to locate four pistols in Bani Neim town, east of the southern West Bank city of Hebron.