Soldiers Injure Many Palestinians In A University In Tulkarem 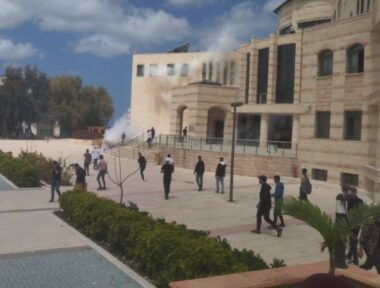 On Tuesday, Israeli soldiers invaded the college campus of Palestine Technical University – Kadoorie, west of Tulkarem, in the northern part of the West Bank, and injured many Palestinians, including two with live fire.

Dozens of soldiers invaded the area, especially the western part of Kadouri, not far from the illegal Annexation Wall, and fired many live rounds, rubber-coated steel bullets, and gas bombs at the Palestinians to force them to leave.

The Palestinian Red Crescent Society (PRCS) has confirmed the soldiers shot two students with live fire, one in the abdomen and one in the leg.

The PRCS added that the soldiers also shot nine with rubber-coated steel bullets and caused at least 34 to suffer the effects of tear gas inhalation.
The college administration had to shut the campus down for the day to avoid further Israeli escalation.