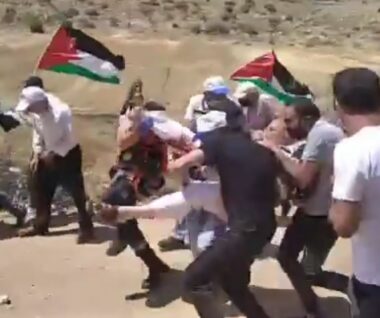 Israeli soldiers injured, Friday, many Palestinians during the weekly procession in Beit Dajan village, east of the northern West Bank city of Nablus.

Salim Abu Jaish, a member of the Land Defense Committee in Beit Dajan, said the Palestinians marched towards their lands where the illegal Israeli colonists installed an outpost on their lands.

Abu Jaish added that the soldiers resorted to the excessive use of force against the protesters and fired many gas bombs and rubber-coated steel bullets. Several Palestinians suffered the effects of tear gas inhalation, before receiving treatment by field medics, while one was moved to a hospital after being shot in the leg.

Furthermore, the Israeli bombs cause fires in olive orchards and farmlands in the eastern part of the village.

The protest was attended by hundreds of Palestinians who gathered in the center of the village before marching towards their lands.