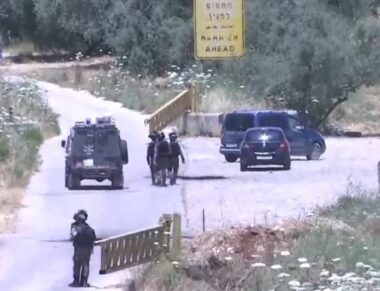 Israeli soldiers attacked, Friday, many Palestinian journalists and broke a camera for Palestine TV, near the Salem military base, west of the northern West Bank city of Jenin, while reporting on the death of two young men who were killed by the army.

The WAFA Palestinian News Agency said the soldiers closed the entire area and assaulted many journalists while trying to force them away.

It added that the soldiers assaulted Palestine TV cameraman Sakher Zawatia, and smashed his camera during the attack against the journalists, in addition to firing many gas bombs at them.

The Israeli army deployed dozens of additional soldiers around the military base and its surroundings, after isolating the entire area.

The attacks took place after the soldiers killed, on Friday morning, two Palestinians, and seriously injured a third, near the Salem Israeli military roadblock, after the military claimed they fired live rounds at the soldiers and were killed in the ensuing exchange of fire.