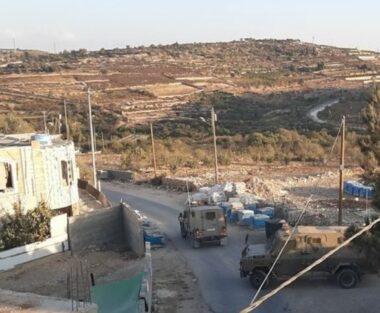 Israeli soldiers injured, on Saturday evening, many Palestinians in the ath-Thaher area, in Beit Ummar town, north of Hebron, in the southern part of the occupied West Bank, after several military jeeps invaded it.

Media sources said the soldiers invaded the ath-Thaher area, near the illegal Karmie Tzur colony, which was built on stolen Palestinian lands, leading to protests, especially near the Somoud Mosque.

They added that the soldiers fired many gas bombs and concussion grenades, causing scores of Palestinians to suffer the effects of teargas inhalation.

It is worth mentioning that the soldiers frequently invaded the town, and repeatedly attack the farmers while working on their lands, to force them away. Numerous attacks are also carried out by the illegal colonialist settlers.

In related news, a group of Israeli colonists invaded the Old City of Hebron, the az-Zahed neighborhood and Ein Askar area in Hebron city, and harassed many Palestinians, while the soldiers stood and did not attempt to intervene.