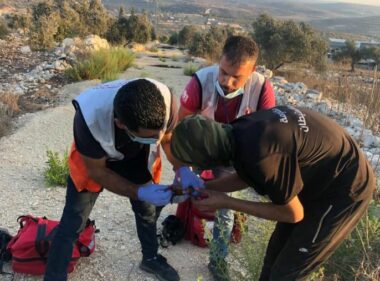 Morad Eshteiwi, the media coordinator of the Popular Committee in Kufur Qaddoum, said the soldiers fired many rubber-coated steel bullets and gas bombs at the protesters as they marched from the center of the town.

He added that five young men were shot with rubber-coated steel bullets; four of them received the needed treatment by local medics, and one was rushed to Darwish Nazzal Governmental Hospital for further treatment.

On Friday, the soldiers injured seven Palestinians, including a journalist, and caused many to suffer the effects of teargas inhalation, after the army attacked the weekly procession in Kufur Qaddoum town.

Palestinians have been holding weekly demonstrations, on Fridays and Saturdays, in Kufur Qaddoum village, since 2003, to demand the Israeli authorities reopen the village’s main road, which was closed in 2002, for the benefit of illegal settlers in nearby Israeli colonies, especially the Kedumim colony, which was built on private Palestinian lands.