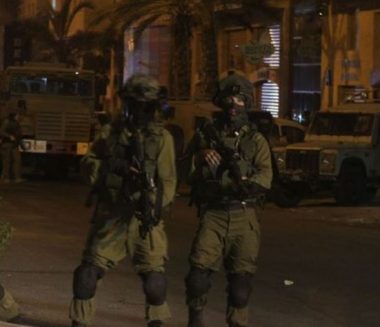 Israeli soldiers invaded, on Monday evening, Shu’fat refugee camp, north of occupied East Jerusalem in the West Bank, leading to clashes before the army shot at least three Palestinians, including a child, and caused scores to suffer the effects of teargas inhalation.

The Palestinian Red Crescent Society said one child, only eleven years of age, was shot with a rubber-coated steel bullet in the forehead, and was moved to Hadassah Israeli medical center.

It added that a Palestinian man, 60, was shot with rubber-coated steel bullets in the face and ear, and another Palestinian was shot in his leg.

The soldiers also fired dozens of gas bombs into the refugee camp, causing scores of residents to suffer the effects of teargas inhalation.

The clashes started in the refugee camp after dozens of soldiers invaded it through its main entrance, and deployed in its alleys.