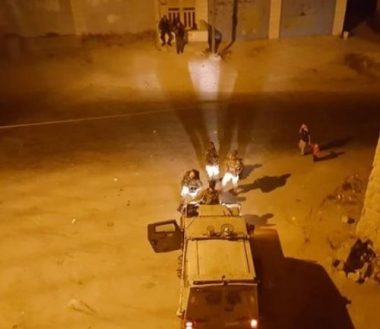 Israeli soldiers abducted, on Monday at dawn, four Palestinians, including one journalist, in the West Bank governorates of Hebron and Jenin, during extensive military invasions and violent searches of homes.

The Hebron office of the Palestinian Prisoners’ Society (PPS), in the southern part of the occupied West Bank, has reported that the soldiers abducted Osama Adnan Rajabi, from Hebron city, and a journalist, identified as ‘Ala Jabr at-Teety, from the al-‘Arroub refugee camp, north  of Hebron.

The soldiers also invaded many homes in Sa’ir town, northeast of Hebron, and installed a roadblock at the main northern and southern roads of the governorate.