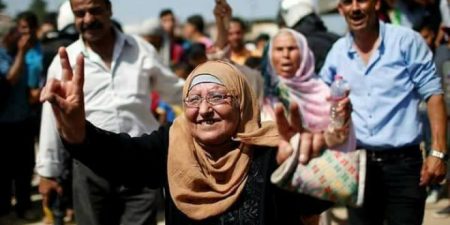 The Palestinian Authority (PA), represented by PM Rami Hamdallah, arrived in Gaza this afternoon, through Erez checkpoint, for an official welcome and made optimistic statements in regard to a national reconciliation, after 10 years of division between the West Bank and Gaza Strip.

The cabinet is scheduled to hold its first meeting in Gaza on Tuesday morning, according to the PNN, after which it will assume its official duty as the government in charge of the Gaza Strip.

The reconciliation was facilitated three weeks ago when Hamas, the defacto ruling party in the Strip since 2007, dissolved the administrative committee it had established in March to run Gaza affairs, and agreed to turn over power to the Ramallah-based Palestinian Authority, but the movement’s armed wing remains the dominant power in the Palestinian enclave of two million people.

Addressing the crowds, Hamdallah urged people to support the reconciliation efforts. He said, “We return to Gaza in order to conclude reconciliation and national unity and end the painful impacts of divisions and to rebuild Gaza brick by brick,”

He stressed, “We came with instructions from Abbas to tell the world from the heart of Gaza that the Palestinian state cannot and will not be established without geographical and political unity between Gaza and the West Bank.”

Hamas’s reversal was the most significant step toward Palestinian unity since the government was formed in 2014, as it failed to function in Gaza specially with the growing electricity and water crisis.

Analysts said narrowing internal divisions could help western-backed Abbas counter Israel’s argument that it has no negotiating partner for peace with the Palestinians.

A Hamas police honor guard and hundreds of Palestinians, many of them waving Palestinian flags, awaited Hamdallah at the Israeli checkpoint which the prime minister and his motorcade passed.

“It is a celebration, a national holiday,” said Abdel-Majid Ali, 46. “We hope this time reconciliation is for real.”

“The road ahead will be long and hard, but momentum of reconciliation and peace should not be missed,” Nickolay Mladenov, the U.N. special coordinator for the Middle East peace process wrote on Twitter.