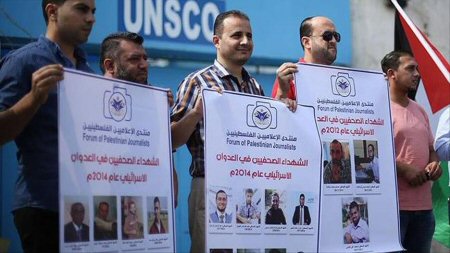 The Palestinian Journalists Forum denounced the recent escalation in Israel’s egregious violations of international law, against them in the West Bank.

Israeli forces detained, in the early hours of Monday, Al-Aqsa channel correspondents Alaa Tetti, from northern Hebron, and Ameer Abu A’raam, from Birzeit, after breaking into and ransacking their homes.

The Palestinian Journalists Seminar underscored the right of Palestinian journalists to cover the events and show the truth despite Israel’s illegal practices.

It also called upon international human bodies and activists to shoulder responsibility in providing protection for journalists and mass media in the Palestinian territories.