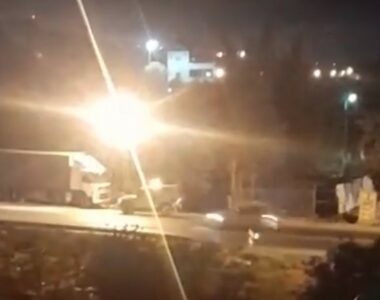 On Sunday evening, Israeli soldiers injured many Palestinians nonviolently marching, demanding the release of corpses of slain Palestinians in Beit Ummar town, north of Hebron, in the southern part of the occupied West Bank.

Local media activist Mohammad Awad said hundreds of Palestinians marched in the town, demanding the army to allow the transfer of the corpses of slain Palestinians back to their families.

He added that dozens of soldiers surrounded the town before invading it, stormed several stores and occupied their rooftops, and used them to fire gas bombs and concussion grenades at the protesters.

Awad said the army is still holding the corpses of several Palestinians killed by Israeli soldiers in many areas, including ‘Aahed Abdul-Rahman Ekhlayyel, 24, from Beit Ummar, who was killed by the army two years ago, on January 4, 2021, and Israel still refuses to transfer his corpse to his family for proper burial.