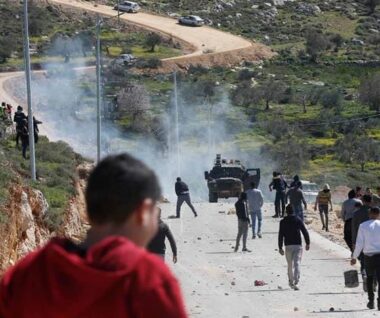 Israeli soldiers injured, on Tuesday at dawn, many Palestinians with rubber-coated steel bullets, and caused several others to suffer the effects of teargas inhalation, in the al-‘Arma Mountain area, in Beita village, south of the northern West Bank city of Nablus.

Local sources said the soldiers invaded the mountain and attacked the Palestinians who have been camping there to protect their lands amidst ongoing plans to illegally annex them for the benefit of the illegal Israeli colonies.

The Secretary of Fateh Movement in Beita, Minwer Bani Shamsa, said the soldiers stormed the mountain during early dawn hours, and started firing gas bombs and rubber-coated steel bullets at the Palestinians, causing many injuries.

Bani Shamsa added that the Palestinians started protesting and camping in the mountain after a group of colonialist settlers invaded it.

The mountain has an archeological site that has been subject to constant attempts by the colonists who want to occupy it and install an outpost.

The mountain spreads over 250 Dunams; walls can be found atop of it indicating an ancient castle, in addition to seven water reservoirs hewn into rocks, which makes it a constant target for the colonialist settlers.