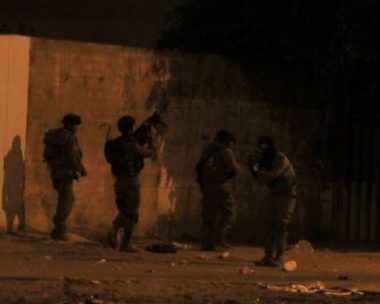 Israeli soldiers invaded, earlier Monday, two neighborhoods in the southern area of Hebron city, and the al-Fawwar refugee camp, in the southern part of the occupied West Bank, caused many Palestinians to suffer the effects of teargas inhalation, and abducted one.

The soldiers invaded Gheith and Salayma neighborhoods, in the southern area of Hebron city, and attacked Palestinian protesters.

The soldiers fired gas bombs at the protesters, and several surrounding homes, causing many Palestinians to suffer the effects of teargas inhalation.

In addition, the soldiers invaded and searched homes in the al-Fawwar refugee camp, south of Hebron, and abducted Ala’ Khalil al-‘Azza, 25.

In related news, the soldiers abducted four Palestinians, including two children and a former political prisoner, from their homes in Nahhalin town, west of Bethlehem, in the occupied West Bank.

The soldiers also invaded the home of Mohammad Ezzat Shakarna for the second time in 24 hours, after the army invaded Nahhalin, at dawn Sunday, and shot his son, Noureddin, 20.

Furthermore, the soldiers injured several Palestinians in Jenin, in the northern part of the occupied West Bank.