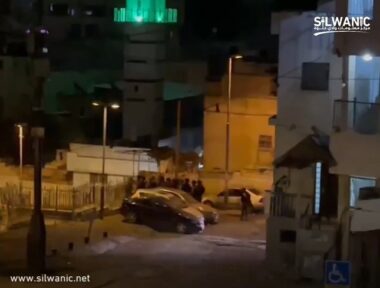 Israeli soldiers injured, on Thursday evening, several Palestinians and caused many to suffer the effects of tear gas inhalation, in addition to abducting two, in Silwan town, south of the Al-Aqsa Mosque, in the occupied Palestinian capital, Jerusalem, in the West Bank.

The Wadi Hilweh Information Center In Silwan (Silwanic) said several army jeeps invaded the town before the soldiers broke into and searched a few homes, leading to protests.

Local medics provided treatment to two Palestinians who were shot with rubber-coated steel bullets and many others who suffered cuts and bruises in addition to the effects of tear gas inhalation.

During the invasion, the soldiers abducted two young men, identified as Ehab Abu Sneina and Monther Roweidi, and took them to an interrogation facility in occupied Jerusalem.

It is worth mentioning that the soldiers assaulted and injured Monther before abducting him.

Dozens of soldiers were also deployed in many parts of the town where they also closed several streets and prevented the Palestinians from crossing.

It is worth mentioning that several Palestinian protesters burnt a car owned by an illegal colonizer living in the al-Ein area.

The car was in an area that was illegally annexed from the Palestinians before it was turned into a public parking area for the colonizers.