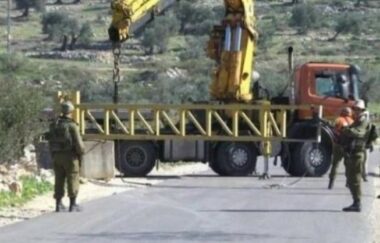 The Israeli army closed, Friday, the main Jenin-Nablus Road, in the northern part of the occupied West Bank, until further notice.

They added that the soldiers closed the road to the Palestinians while at the same town allowing dozens of illegal Israeli colonizers from Shavei Shomron and other nearby colonies in the area to gather there, especially near the former Homesh colony.

It is worth mentioning that, on Thursday evening, the colonizers attacked many Palestinian cars on the Jenin-Nablus Road, in addition to the streets leading to Sebastia, Burqa, and Bazaria, causing damage to many cars.

However, instead of removing the assailing colonizers, the army decided to close the road to Palestinian traffic.

In related news, the soldiers invaded Husan town, west of Bethlehem, south of occupied Jerusalem in the West Bank, before breaking into several homes and shops, and inspecting surveillance recordings.

In Hebron city, in the southern part of the West Bank, the soldiers invaded the Bab az-Zawiya area in the center of the city and closed several streets.