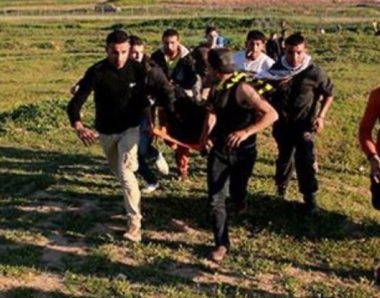 Israeli soldiers shot, overnight, one Palestinian with live fire, and caused many others to suffer the effects of teargas inhalation, in addition to invading farmlands, in several parts of the Gaza Strip.

Medical sources said the soldiers shot a young man with live fire, east of the al-Boreij refugee camp, in central Gaza, and caused many to suffer the effects of teargas inhalation, after the army attacked protesters on Palestinian lands near the fence.

The soldiers also attacked protesters with live fire and gas bombs, east of Gaza city, and east of Rafah, in the southern part of the coastal region.

In related news, five armored Israeli military bulldozers carried out a limited invasion into Palestinian lands, east of the al-Boreij refugee camp, in central Gaza, and bulldozed them.