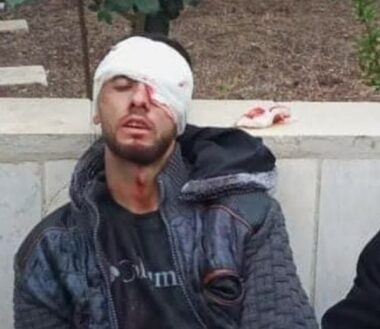 Israeli soldiers injured Wednesday dawn, at least eight young Palestinian men, one seriously, in Nablus, in the northern part of the occupied West Bank, and Beita town, south of Nablus. The army abducted eight young men in several parts of the Nablus governorate.

Update: The Nablus branch of the Palestinian Red Crescent Society (PRCS) said the soldiers shot six young men with live rounds, including one in a critical condition, in Beita town.

The seriously wounded young man was shot with a live round in the chest in Beita.

Update: The soldiers abducted Islam Diab, Raed Barham, and Ehab Hamayel, from their homes in Beita.

The PRCS added that the soldiers also shot two Palestinians with rubber-coated steel bullets and caused five to suffer the effects of tear gas inhalation in the eastern part of Nablus city.

The soldiers invaded and ransacked many homes in Beita and interrogated the residents before abducting six young men.

The sources added that the soldiers fired live rounds and rubber-coated steel bullets, wounding six young men and causing many to suffer the effects of tear gas inhalation.

One of the injured Palestinians, Bilal Hamayel, was shot with a rubber-coated steel bullet in the eye before the medics rushed him to a hospital.

In Orif village, south of Nablus, the soldiers abducted a young man, Nidal Shehada, after invading his home and violently searching it.