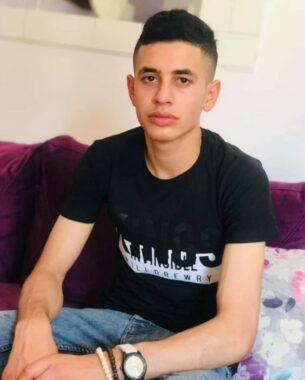 Israeli soldiers killed Wednesday dawn, one Palestinian, and injured at least three during massive invasions and exchanges of fire in Jenin, Jenin refugee camp, and Qabatia town, in the northern part of the occupied West Bank.

The head of Ibn Sina Hospital in Jenin, Jani Abu Joukha, said the soldiers killed a young Palestinian man after shooting him with a live round in the head in the Jenin refugee camp.

The slain Palestinian has been officially identified as Ahmad Mohammad Lutfi Masad, 18, from Burqin town, west of Jenin.

The soldiers also shot and moderately injured three young men during the invasion.

The Israeli army also deployed drones during the invasions and seems to be pushing more soldiers and armored vehicles into the Palestinian communities, especially Jenin, Jenin refugee camp, and Qabatia town.

After the soldiers killed Ahmad, hundreds of Palestinians marched in the refugee camp calling for ongoing resistance against the Israeli occupation until liberation and independence.

The soldiers caused excessive damage to the home of Jamal Abu al-Haija during the violent invasion and searches of the property. Medical sources at Ibn Sina Hospital in Jenin said the soldiers shot four Palestinians from the Jenin refugee camp, including one who suffered a critical gunshot wound to the head.

During the invasion of the Jenin refugee camp, the soldiers stormed and ransacked several homes and abducted Assem Abu al-Haija, the son of detained political leader Jamal Abu al-Haija, 61, after assaulting him.

The soldiers caused excessive damage to the home of Jamal Abu al-Haija during the violent invasion and searches of the property.

It is worth mentioning that Jamal Abu al-Haija, a political leader of Hamas, was abducted by the army on August 26, 2002.

Hanaisha was imprisoned by Israel for ten years before being released just three months ago.