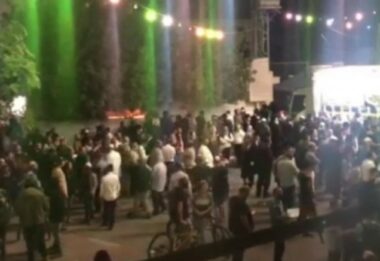 Alo al-Jasser, the head of Salfit Town Council, said hundreds of colonizers invaded the town and headed to the archeological area accompanied by dozens of soldiers and prevented the Palestinians from approaching it.

They added that the soldiers were extensively deployed, since evening hours, at all roads leading to the town before invading it.

The soldiers imposed a curfew and forced all stores shut before ordering the Palestinians to leave so that the colonizers could “tour” the area.

The invasion led to massive protests before the soldiers started firing live rounds, rubber-coated steel bullets, and gas bombs at the protesters and surrounding homes.

Medical sources said an elderly man, Yousef Saleh Abu Shadi, 75, was shot with a rubber-coated steel bullet before the Palestinian medics rushed him to a hospital in Salfit.