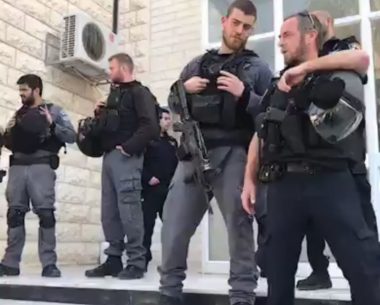 Dozens of Israeli soldiers and police officers invaded, Monday, the al-Makassed charitable society hospital in occupied Jerusalem to prevent the Palestinians from holding a celebration for the fiftieth anniversary of the medical center’s establishment.

The celebration was being held in the theater room of the hospital’s medical college, in Jabal az-Zeitoun area, in occupied Jerusalem.

Palestinian Health Minister, Dr. Jawad Awwad, and Jerusalem Affairs Minister Adnan al-Husseini in addition to Jerusalem Governor Adnan Gheith, the head of the Higher Islamic Committee, Sheikh Ekrima Sabri, and the head of al-Makassed Hospital, al-Makassed Chairman Dr. Arafat Hadmi, along with many other officials and figures were participating in the celebration, which is sponsored by Palestinian President Mahmoud Abbas.

Besides honoring the golden anniversary of its establishment, the hospital was also celebrating the opening of several news branches in the medical center.

It is worth mention that the soldiers forced everybody out of the theater where the celebrating was about to take place and abducted several Palestinians.

Nevertheless, the Palestinians later conducted the celebrations despite the army’s invasion and violations.