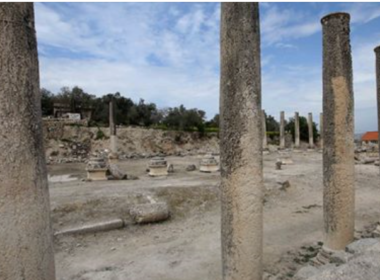 Several Israeli army jeeps invaded, Monday, the Archeological sites’ area in the al-Bayader area in Sebastia Palestinian own, north of the northern West Bank city of Nablus, and threatened to demolish the structures and all rehabilitation work conducted by the Local Council.

Mohammad Azem, the Mayor of Sebastia, said the soldiers threatened the City Council workers with abduction and imprisonment and informed them that the military will demolish and destroy any work in the site.

Azem added that the soldiers informed the workers that they will be coming into the area next month, to accompany large groups of colonialist settlers during the Jewish holidays.

On September 9th, the soldiers invaded the al-Bayader area and informed the locals, and the City Council, that the army intends to bulldoze and remove all materials and structures used for the rehabilitation of the site.

The soldiers threatened the City Council workers with abduction and imprisonment and informed them that the army will not allow any project in the area.

It is worth mentioning that the army repeatedly invades the archeological sites in Sebastia to accompany buses and cars of illegal colonialist settlers.

The archeological sites are in Area B of the occupied West Bank, under Palestinian civil control and joint Israeli-Palestinian security control.

Israel has been threatening to demolish Palestinian structures, installed by the local council near the archeological site, while the military has been frequently invading it to accompany groups of illegal colonialist settlers into the area, in addition to constantly removing the Palestinians from the area.

The Local Council in Sebastia has been working on implementing a tourism project, and rehabilitation projects, to try to add it to the United Nations’ list of World Heritage Sites.