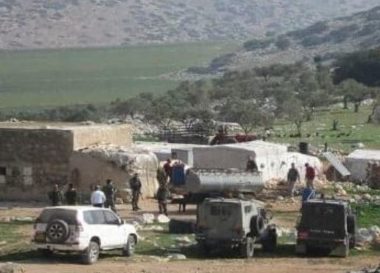 The head of Tubas’s local office of the Ministry of Education, Saed Kabaha, said a large military force, accompanied by an army ambulance, invaded the village, before storming the at-Tahadi School, and confiscated a tent used as its administration office.

He added that the soldiers also closed the road leading to the school, and prevented the students from reaching it.

There are four teachers in the make-shift school, which includes three classrooms for grades 1-6, a kitchen and a toilet room.

The soldiers also confiscated a tractor, owned by a farmer, identified as Hayel Hussein Turkman, in the village.

Two days ago, the soldiers invaded the school, before dismantling caravans, used as classrooms and offices.