Soldiers Invade Many Areas In Jenin 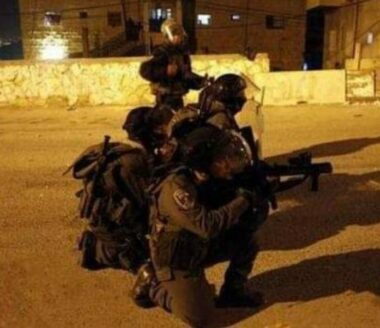 Israeli soldiers invaded, on Friday at dawn, many areas in the Jenin governorate, in the northern part of the occupied West Bank, leading to protests,

They added that the invasion led to protests before the soldiers fired a few live rounds, rubber-coated steel bullets, and gas bombs.

The soldiers also invaded Qabatia town, south of Jenin, before searching various hills and a meadow, while firing flares, in addition to invading and searching homes, leading to protests.

During the invasion of mountain areas in Qabatia, the soldiers dug and bulldozed lands.

In related news, the soldiers abducted Mohammad As’ad Bani Gharra, from the Jenin refugee camp, while working in Jerusalem.