Israeli Colonizers Install An Outpost On Palestinian Lands Near Hebron 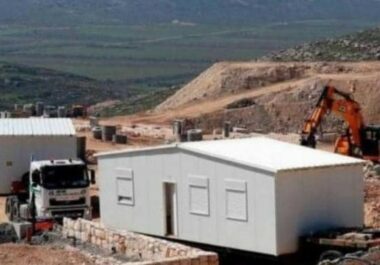 Israeli colonizers installed, on Thursday evening, an outpost on Palestinian lands near Yatta town, south of Hebron, in the southern part of the occupied West Bank.

Rateb Jabour, the coordinator of the National and Popular Committees against the Annexation Wall and Colonies, said the colonizers installed at least three mobile homes on the Palestinian lands and added that Israeli soldiers also accompanied them.

He stated that the new outpost was installed not far from the illegal Susya colony which was installed on stolen Palestinian lands.

Jabour also said that the colonizers and the soldiers are ongoing with the illegal takeover of Palestinian lands, in addition to the repeated attacks on the farmlands, including uprooting and burning them, in addition to the violations against the shepherds.

These violations aim at forcing the Palestinians out of their lands so that Israel can build and expand its illegal colonies, in direct violation of International Law, the Fourth Geneva Convention, and various United Nations and Security Council resolutions.