Soldiers Invade Orphanage School In Jerusalem, To Stop “Yes To Peace, No To War” festival 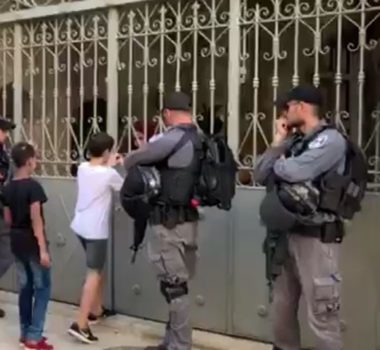 On Friday evening, Israeli soldiers, including undercover officers, invaded the Islamic Industrial School for Orphans, in the Old City of occupied Jerusalem, and stopped an educational activity held by the General Union of Palestinians Writers.

Media sources said the school was about to hold a poetry festival, dubbed as “Yes To Peace, No To War,” and shut it down.

The activity was organized by several Palestinian poets in occupied Jerusalem, and was meant to encourage the students to read and write, and to help them realize their potentials and talents.

The sources added that the soldiers, accompanied by undercover police officers, stormed the school just minutes before the festival was supposed to start, and shut it down.

The Israeli Police said that it has a direct order, signed by the Israeli Minister of Public Security and Strategic Affairs, Gilad Erdan, preventing any activity, organized or linked in any way shape or form, with the Palestinian authority.