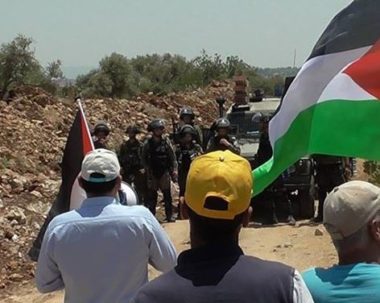 The procession started from the center of the village, when the locals, accompanied by Israeli and international peace activists, marched while carrying Palestinian flags, and chanting against the ongoing illegal Israeli military occupation, its colonies and the Annexation Wall.

The soldiers attacked the nonviolent protesters with gas bombs and concussion grenades, causing many to suffer the effects of teargas inhalation.

It is worth mentioning that today’s procession also came in condemnation of the so-called “Deal of the Century,” and all conspiracies targeting the legitimate, internationally guaranteed rights of the Palestinian people.

In related news, the soldiers attacked the weekly procession in Kufur Qaddoum town, east of the northern West Bank city of Qalqilia, causing dozens of protesters and international journalists to suffer the effects of teargas inhalation.