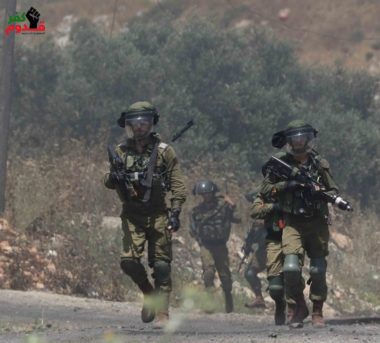 Israeli soldiers attacked, Friday, the weekly procession in Kufur Qaddoum town, east of the northern West Bank city of Qalqilia, and caused dozens of protesters and international journalists to suffer the effects of teargas inhalation.

Morad Eshteiwi, the media coordinator of the Popular Committee against the Annexation Wall and Colonies in Kufur Qaddoum, said dozens of soldiers invaded the town, and attacked the protesters with rubber-coated steel bullets, gas bombs and concussion grenades.

He added that dozens of residents, and several international journalists, suffered the effects of teargas inhalation.

The soldiers also attempted to ambush several protesters by hiding in an abandoned home, but their hideout was soon discovered, and the soldiers started firing live rounds. In addition, the soldiers invaded the town, and broke into a number of homes, before occupying their rooftops and using them as firing posts and monitoring towers.

Eshteiwi stated that the protesters marched from the center of the village, while chanting against the ongoing illegal Israeli occupation of Palestine, and the conspiracies targeting their legitimate rights of liberation and independence, especially the so-called “Deal of the Century” and the “Bahrain Conference.”