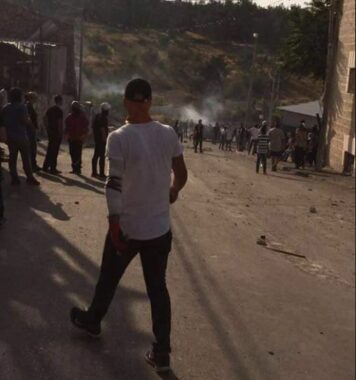 Israeli soldiers invaded, on Sunday at dawn, the Palestinian town of Silwad, east of the central West Bank city of Ramallah, and al-’Isawiya in the eastern part of occupied East Jerusalem, injured several Palestinians and abducted four.

Media sources in Ramallah said several army jeeps invaded Silwad town, and attacked dozens of Palestinians who protested the invaded, before abducting four of them.

They added that the soldiers invaded the eastern part of the Silwad, and fired gas bombs, concussion grenades, rubber-coated steel bullets, and a few live rounds at local youngsters, who hurled stones at the army vehicles. A military drone was also seen flying over the area.

The soldiers also ambushed and abducted four young Palestinian men, before moving them to an unknown destination.

Furthermore, the soldiers invaded the al-‘Isawiya town in Jerusalem and attacked dozens of youngsters who protested the invasion.

The soldiers fired a barrage of gas bombs and concussion grenades at the protesters and several surrounding residential buildings, while some protesters hurled Molotov cocktail and empty bottles at the army vehicles.

Many Palestinians suffered the effects of teargas inhalation, and one soldier was mildly injured after being struck with an empty bottle in the head during the invasion.