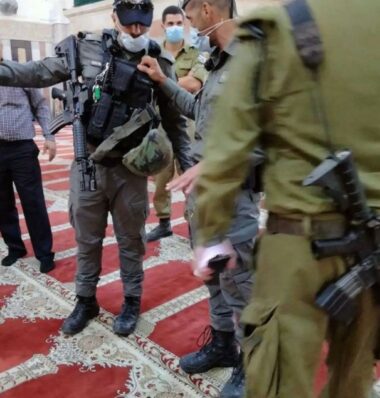 Israeli soldiers and military police officers invaded, Monday, the Ibrahimi Mosque in the southern West Bank city of Hebron, as part of a training drill in and around the holy site.

Eyewitnesses said dozens of soldiers and officers invaded the mosque, its yard, and surrounding area, especially the eastern gate of the holy site.

The Palestinian Ministry of Waqf and Islamic Affairs issued a statement denouncing the desecration of the holy site and described it as a serious violation aiming at imposing full control on the holy site.

In addition, the soldiers invaded Um al-Kheir and the at-Tiwana villages, south of Hebron, after surrounding and isolating them.

The soldiers stopped and searched several cars, including the car of Mohammad Rib’ey, the head of the Tiwana Village Council, and detained him for more than 30 minutes.

The soldiers also invaded and ransacked the home of Ibrahim al-Hathalin, and threatened to abduct him because of the massive media coverage and the solidarity the family is receiving after his brother, Suleiman al-Hathalin, 75, was killed when an Israeli tow truck ran him over in the Um al-Khair.

On Monday at dawn, the soldiers abducted six Palestinians from their homes in several parts of the occupied West Bank.